Please note that the deadline to apply for these positions has now passed. Two more postdoc positions will be announced in the context of my ERC Starting Grant so keep an eye on this website.

In the context of my ERC Starting Grant project I seek to hire two PhD students to begin in fall 2019. Please see the advertisement here. 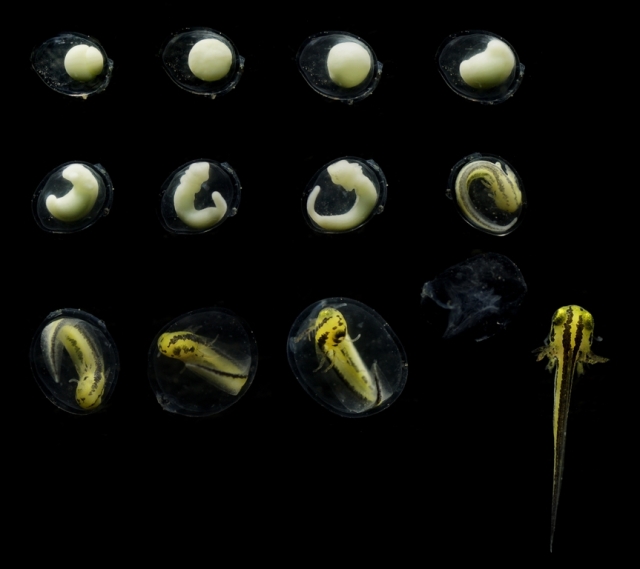 A lucky Triturus embryo that has avoided the arrested development associated with ‘chromosome 1 syndrome’. This picture is by Michael Fahrbach and taken from his recent book (Fahrbach & Gerlach (2018) The genus Triturus).

Genetic studies in the family Salamandridae have regularly revealed cryptic species – genetically distinct species that previously went unrecognized due to their morphological similarity. The most recent salamandrid example is provided by the banded newts (genus Ommatotriton). While the split between the southern banded newt (O. vittatus) versus ‘O. ophryticus’ is generally accepted, this is not the case for the further split of the latter taxon into the Caucasian banded newt (O. ophryticus sensu stricto) and the Anatolian banded newt (O. nesterovi). From morphology O. vittatus is known to be distinct, but no differences are known to separate the other two banded newt species.

Pictures of the three banded newt species, courtesy of Michael Fahrbach, Sergé Bogaerts, and the late Bayram Göçmen and Max Sparreboom. The vernacular names are newly proposed in this study.

Based on a superficial inspection of photographs, it seemed to me that two ‘band’ characters might be useful for species identification. Now, based on a survey of almost 700 museum specimens, we show in a paper in Salamandra that in O. nesterovi the lateral white band generally I) continues from the front limbs up to the eye and II) is interrupted by large specks on the tail, while this is generally not the case in O. ophryticus (see the figure above). In the third member of the genus, O. vittatus, both character states for each ‘band’ character occur at similar frequency, but the lateral white band is considerably broader compared to the other two species. Hence, all three banded newt species can be identified from morphology.

Triturus is great, showing intricate ritualized mating behaviour where males congregate at leks and perform elaborate dances to wow the females, representing an adaptive radiation reflecting gradients of aquaticness, providing strong support for the hypothesis of historical hybrid zone movement, and representing the best-known example of an evolutionary enigma known as a balanced lethal system – as I explain in a new ‘quick guide’ published in Current Biology. Follow this link for temporary free access.

Thanks to Michael Fahrbach and Paolo Mazzei for use of their pictures in the compilation accompanying the quick guide.

The main motivation to conduct the outgoing phase of my Marie Skłodowska-Curie fellowship at the University of California, Los Angeles was to design a ‘sequence capture by target enrichment’ pipeline for Triturus. At UCLA, Evan McCartney-Melstad and Brad Shaffer possess the necessary experience as they use this technique for their system of hybridizing tiger salamanders (genus Ambystoma). Adapting the pipeline to Triturus went superbly and the first paper based on this dataset has now been published in Molecular Phylogenetics and Evolution.

Triturus is an example of an adaptive radiation: the more slender a species’ body build, the longer its annual aquatic period. This suggests a causal relationship between body build evolution and ecological specialization. While adaptive radiations provide some of the best examples of evolution in action (think Darwin finches and cichlid fishes), the relationships between the species involved are notoriously difficult to decipher. This problem also applies to Triturus: despite several attempts, the phylogeny was hitherto unresolved, hampering our ability to retrace the eco-morphological evolution in Triturus.

The new Triturus tree (the newt pictures are by Michael Fahrbach)

With our ‘sequence capture by target enrichment’ pipeline we can sequence about 6000 DNA markers for the genus Triturus. To try and resolve the Triturus phylogeny we obtained a dataset including representatives of all marbled and crested newt species. Three distinct tree-building methods each recovered the same Triturus tree. Now we were able to place Triturus’ eco-morphological divergence into an evolutionary context: the red arrows on the Triturus tree above show inferred additions of trunk vertebrae, resulting in more slender and aquatic bodies. Our results show that the genus gradually evolved more elongated and aquatic newts. Nice!

The Wielstra lab at Leiden University and Naturalis

It’s official, on 1 February I will start my ERC Starting Grant project as a tenure track Assistant Professor at the Institute of Biology at Leiden University in the Netherlands. Meanwhile I will be Honorary Researcher at Naturalis Biodiversity Center. In the context of my project I will hire two PhD students and two postdocs. I expect to start advertising positons halfway 2019, so stay tuned!

An unfortunate Triturus embryo, experiencing the arrested development that is associated with the balanced lethal system that is shared by all Triturus species, known as ‘chromosome 1 syndrome’. This picture is by Michael Fahrbach and taken from his recent book (Fahrbach & Gerlach (2018) The genus Triturus).

Invasive species can threaten native biota by means of competition, predation and infection. A less-known risk is genetic pollution: the (partial) replacement of local genotypes via hybridization. A particular challenge of quantifying invasive hybridization is that the closely related species involved tend to be morphologically similar. As a consequence, conservation action would depend on large scale genotyping. Addressing genetic pollution is a notoriously contentious issue with complications arising at the stage of obtaining and interpreting information.

In the context of my Marie Skłodowska-Curie fellowship I proposed a secondment at the Invasive Alien Species Team. I collaborated with the Dutch NGO RAVON (Reptile, Amphibian, and Fish Conservation Netherlands) as well. We developed a molecular toolkit that allows that allows efficient screening for genetic pollution in a Dutch case of invasive hybridization in crested newts and that could easily be adapted to other cases of invasive hybridization.

Furthermore, we summarize the state of the field and provide guidelines for establishing much-needed policy for the management of genetic pollution. There are clear parallels between the crested newt case and the work of Brad Shaffer, my outgoing host at UCLA, on tiger salamanders in California. Here the native Californian tiger salamander is threatened by invasive hybridization with the introduced barred tiger salamanders. Brad’s experience helped shape the report we wrote, which I hope can help address the complicated conservation issue of genetic pollution.

I initiated this work as a Newton International Fellow. This project has received funding from the European Union’s Horizon 2020 research and innovation programme under the Marie Skłodowska-Curie grant agreement No. 655487.